Rometta is one of the more original fountain of the Villa; and if it is considered that it was created by a man of the ' 500, it is obvious to remain bewitched in front of its extraordinary details. 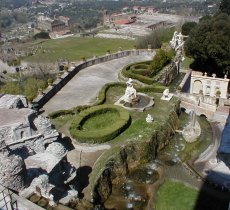 Created by the usual Pirro Logorio, unfortunately today the Fountain is not complete as it was originally because it was demolished in the XIX, as it is possible to see by looking the designs made by Venturini in 1685.
Lots of the Roman buildings in miniature have been demolished. They were the scenography of important statues that still exist here; like the she wolf with the twins, Rome armed with armour, helmet and lance. 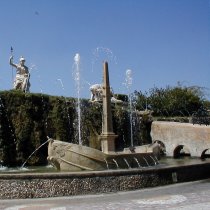 At the feet of this statue, between the water of a channel (the river Tevere) there is a boat which represents the island Tiberina, where the first group of the eternal city settled at the beginning since it was a simple ford).
The statues were created by Pierre de la Motte.
In the buildings in miniature it must be said that there were reproduced even the arches of triumph of Tito, Settimio Severo and Costantine and also the Traian column.

In a word, all the representative buildings included between Flaminia door and S.Paolo door were represented. So the artistical Roman beauties are opposed to the natural beauties of Tivoli, exalted in the Fountain of Tivoli or the Ovate.