The Fountain of Dragons

Fountain of the Dragons

takes its name from the devices invented by Tommaso da Siena, because water caused crackling alternating with outbreaks. The visit of Gregorio XIII convinced Luigi to erect the monument with the four winged dragons, symbol of the family of the Pope, the Boncompagni. It is in the hemicycle formed by the double circular stair that comes down from the avenue of the One hundred Fountains.
Under the balcony of the avenue of the One hundred Fountains, there is a niche, with an enormous statue of Hercules. The overlooking fountain is adorned with four dragons placed in the base and in circle. They spit out water and there is also a high jet of water in the center of the circle. 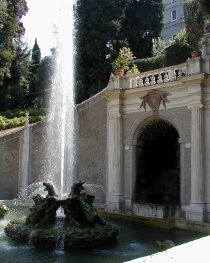 The Fountain of Dragons

in which other small statues where placed as to underline the importance of the fountain. The Fountain of Dragons represents the eleventh effort of Hercules who kills the one hundred heads dragon in order to get hold of the gold apples of the Garden of the Esperidi and give them to Euristeo.

Ippolito II and its family were particularly interested in this demigod. In fact, some boys of the family took also its name (like in the case of the dukes of Ferrara, Modena, Reggio, that is Ercole I and Ercole II). The founder of the Villa adopted also the "ab insomni dracone"; in fact, the Cardinal wanted in his garden statues and fountains dedicated to Hercules, because as his friend Muret says "the same apples that Hercules took away from the sleepy dragon, now belong to Ippolito who, grateful for what received, wanted that his garden was considered sacred by the author of the gift".