Tivoli in the Renaissance

The term Renaissance has also been used to define time periods outside of the end of 15th and 16th centuries.
During the Renaissance popes and cardinals did not limit their embellishment program to Rome, and erected buildings in Tivoli also. In 1461 Pope Pius II built the massive Rocca Pia (a quadrilateral fortress composed of four round corner-towers) to control the always riotous citizens and reduce them to obedience, and as a symbol of the permanence of papal temporal power here. 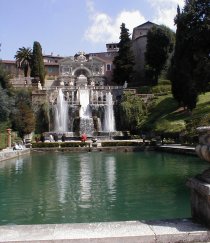 However the disagreements between Tivoli and Roma returned whit the death of Pope Julius II so much as, in 1522, during the plague tiburtine peole denied hospitality to roman nobles. Pope Adrian V spared the inhabitants and gave them the indipendecy from the Senate of Rome.
In 1527 Tivoli was sacked by bands of the German mercenary pikemens (so called "Lanzichenecchi") of the emperor: important archives being destroyed during the attack.
In 1539, Ignatius of Loyola formed the Society of Jesus. In 1540 he came to Tivoli to talk with Pope Paul III who approved the Society.

In the second half of the XVIth century Tivoli had a period of splendour thanks to Cardinal Ippolito d'Este who was appointed governor of the town on 9 September 1550, after the disappointment of a failed bid for the papacy. He immediately wanted to realizie a garden in the hanging cliffs of the "Valle gaudente": Villa d'Este. With its palace and garden, it's one of the most remarkable and comprehensive illustrations of Renaissance culture at its most refined. Villa d'Este was a model followed by many other cardinals, Popes and kings. 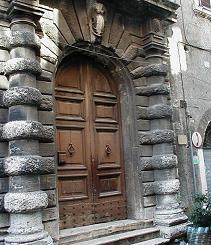 From the 16th century the town saw further buildings: there was a remarkable urban development and many valuable patrician palaces were constructed (Palazzo Cenci¬Alberici, Bellini, PusterIa in Via Trevio and Palazzo Mancini, Pacifici in the old Via Maggiore, nowaday Via Domenico Giuliani).

The Cathedral of St. Lawrence (1635-40) and the Church of the Jesus, the town' s two most significant churches, were erected during the Baroque period.The cathedral, rebuilt in 1635 by Julius Roma, bishop of Tivoli, took the place of the ancient medieval construction (the beautiful Romanesque bell tower still remains as an example). The Church of the Jesus, built in 1587 and devoted to the tiburtine martyr St. Sinforosa, disappeared after an aerial bombing on 26 May 1944.