Cathedral or Church of St. Lawrence

With the coming of religious peace in 313 AD, the Great Hall in Tivoli's forum became the focal point of the town's Christian life led by the local Bishop, the cult of Hercules in the nearby temple having ended. In the 11th and 12th centuries the site of the ancient forum was covered by a three-naved Basilica built in the local Romanesque style

was pulied down shortly before 1650 by order of the Bishop of Tivoli, Cardinal Giulio Roma, to make way for the construction of today's Cathedral, a baroque building. 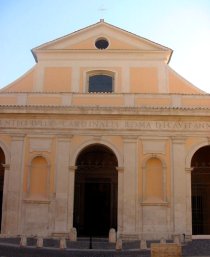 The pronaos, in which architectural fragments of the two previous buildings are kept, leads to the Baroque nave of the Cathedral. The nave, which is flanked by a series of side chapels, leads to the apse, parallel to thè originai apseline of the Basilica. The frescoes in the first side chapel on the left are by Pietro Berrettini from Cortona. The second chapel contains the splendid tomb of Angelo Leonini - Bishop of Tivoli and a relative of Pope Leo X which dates from the Renaissance.

Above the altar in the third side chapel is a priceless 12th century triptych of the Redeemer: the "Trittico del Salvatore"

. Painted on wood in Romanesque Byzantine style, and encased in the 15th century in a gilded silver trame, it shows Christ preaching between the Holy Virgin and Saint John. The walls of the chapel are decorated with 17th century frescoes by Vincenzo Manenti from Orvinio.
The plans for the sacristy were designed by Gianlorenzo Bernini.
The great apse and the vault are painted with frescoes by Carlo Labruzzi and his school, and a valuable 17th century organ is located above the presbytery.
The chapel on the right of the presbytery contains a group of the Deposition of Christ from the Cross

dating from the 13th century. 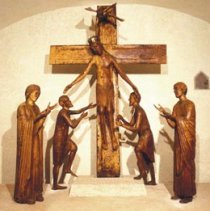 The Redeemer and the Cross are surrounded by the Holy Virgin, Saint John the Evangelist, Joseph of Arimathaea, Nicodemus and an angel. This Romanesque masterpiece, carved in poplar wood in a local atelier, shows the beginnings of the gothic style; it was originally cloaked in parchment and coloured cloth, still partially visible. It was restored by the Italian Ministry of Culture between 1986 and 1988.

The newly arranged display of the sculptures stands on a simple travertine pedestal; thè angel is above the Cross, crowning the figure of Christ. This arrangement frees the other figures from any scenographic effect. The rich ornamentation of the wrought iron gate of the chapel, made in the 17th century, includes the grill, the instrument of the martyrdom of Saint Lawrence, the Patron of the Cathedral.
The followìng side chapel contains beautifui and well preserved frescoes by L. Gimignani (17th century) and P. Locatelli (18th century). On the altar in the last chapel but one stands a splendid marble statue of the Immaculate Conception

by the school of Pierre Puget, a pupil of Gianlorenzo Bernini, sculpted in memory of the 1656 plague, which left Tivoli more or less unscathed.
In the last chapel, two paintings hang above the altar. The oval portrait of the Mater Dolorosa is thought to be the work of Guido Reni or of his school and dates from the 17th century. The second picture is a 16th century work: painted on wood by Alessandro Casolani, it shows the mourning for the death of Christ. All that remains of the Romanesque medieval Basilica is the majestic belltower.