On the summit of Monte Ginestro (753 m), nearly a mile from Palestrina, stood the acropolis of old Praeneste, there are few poor houses (Castel San Pietro) and a ruined medieval castle. For many centuries it was the fur thermost defensive boundary of Palestrina. The castle belonged to the Colonna family from the 13th to 17th century. In the centuries many illustrious people were imprisoned inside the castle, among the other, Corradino di Svevia and Jacopone da Todi which here composed some of his most beautiful works there, including the famous "Stabat Mater". 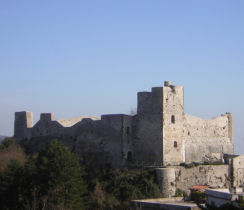 Thanks to its location it was saved from destruction in 1298 when the troops of Pope Boniface VIII razed Palestrina.
Unfortunately in 1438 the fortress was occupied and almost completely destroyed from Pope Adriano IV. At the beginning of XVII century the fortress was sold to Barberini family who resctructured the building but then it was abandoned until nowadays. In recent years it has been the object of extensive restoration efforts.