was built, as the Church of St.Maria Maggiore, on the rests of a roman villa, probably that one of Quinto Cecilio Pio Metello (where also the Church of Annunziata was built), for order of tiburtino Pope Simplicio (468-483). A legend reports that in this place a Christian community, founded by the Apostle Peter, organized its meetings (maybe this could be the reason why a prestigious church was built on a place so uncomfortable). 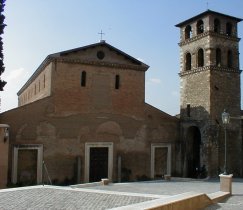 The actual appearance of the church is a combination of two different and complete rebuildings (XII century and 1951) caused for landslides and war events. The church is said "of the Charity" from the name of the Brotherhood that cured the officiatura. In the facade of bricks, three doors are visible. The lateral ones, correspondent to the inner aisles, have been bulwarks; while the central one is garrisoned from two broken marmoree columns, memory of the ancient structure.

In the course of the restoration of 1950, followed to the strafing, the church has been undressed of all its baroque ornaments

that hided the original structure. The original medieval aspect, in fact, had been transformed in 1730 in the course of the works commissioned by the Carmelite father Cornacchioli who equipped the building of altars and ornaments of baroque art, covered the roof with wood ceiling and inserted three altars on each side. 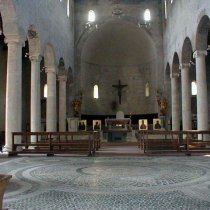 The Bell tower, of square base, is composed from a base and three shelves. The base and the first shelf are going back to the XII century; while the two overhanging shelves, in which the bell cell is located, are of the XIV century. The church is constituted from three aisles

supported from two series of nine columns with Ionic capital, of which twelve are original built in onion marble and six are rebuilt.
The columns are connected to some archs that support the walls with windows with one light on which the roof cover is located.

In the center of nave there is a marble floor in cosmatesca work. At the end of the three aisles there is the apse. The church was decorated with frescoes on the walls, in the apsidal zones and in crypt below

below (we have only documentation about these frescoes). They represent an extremely important work that testimonies the evolution of the Latium painting in the XIII century and the relationships with Rome. On the walls there are two sacred frescos, the only original of the XII century: a scene of the Crocifissione

and a scene of the Virgin with the Child and at the sides St.Peter and St.Paul

. In this church, until 1641, was located the wooden group representing the Deposition of Christ (a valuable work of the Romanesque sculpture of the XII-XIII century) before that it was carried in the Cathedral of S.Lorenzo.