Tivoli in the Middle Age

After the fall of the Roman Empire Tivoli began an independent comune governed by its elected consuls. There was an urban restructuring: the Roman town was replaced by the medieval town through several interventions (for example the ancient forum was replaced with the (Cathedral of St. Lawrence) while the various suburban roman villas (Hadrian's Villa, Quintilio Varo's Villa, ecc.) fell to ruin.
Tivoli maintained a very good position of political autonomy up to the early Middle Ages. It was a period in which the largest subur¬ban villas dating from the Roman age fell to ruin.
During the Gothic war, when Rome was besieged by Narses (with Belisarius, one of the great generals in the service of the Eastern Roman Emperor Justinian I during the "Reconquest"), Tibur was occupied by the troops of Belisarius.
It was afterwards defended by Belisarius and its Isaurians troops against Totila (king of the Ostrogoths), and treacherously surrendered by the inhabitants, whom the Goths repaid with such fearful barbarities that Procopius (the principal historian of the 6th century) declares it impossible to record their cruelties.
So towards the end of 545 the Gothic king took up his station at Tivoli and prepared to starve Rome into surrender. He rebuilt the town and citadel. 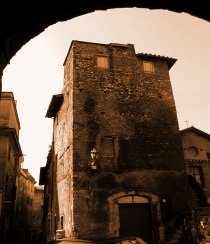 In the 8th century the town lost its ancient name (Tibur), and assumed that of Tiburi and so transformed through Tibori to Tiboli and finally to Tivoli (but its inhabitants are still called Tiburtini and not Tivolesi).
Its history during the middle ages it appears to have been an imperial city independent of Rome and to have been the frequent subject of sieges and struggles between the emperors and the Popes.
In 1001 Tivoli rose again the Emperor Otto III, who had the task of reunifying the Roman Empire. He retook the town, but spared the inhabitants (suggested by Pope Sylvester II and St. Romuald). The forgiveness didn't like to Roman people, as Tibur was a rival they wanted destroyed.

This led to a rebellion by the Roman citizens, headed by Gregory, Count of Tusculum (Frascati); Otto was besieged in his palace and then driven from the city. He withdrew to Ravenna to do penance in the monastery of Sant'Apollinare in Classe. After having summoned his army, Otto headed southwards to reconquer Rome, but died in the castle of Paterno, near Civita Castellana, on 24 January 1002.
On 15 June 1155 Frederick Barbarossa was crowned emperor by Pope Adrian IV but the Roman people rose up against Frederick Barbarossa and the Pope convinced him to abandon Rome not too much sure. Frederick Barbarossa encamped at Ponte Lucano, near Tivoli. On 28 June 1155 the tiburtine people gave the key of the town to the emperor. 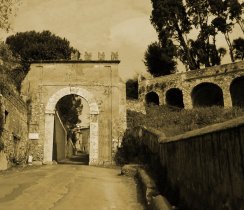 Afterwards Barbarossa gave back the town to Pope, who asserted that " ab antiquo" the Church had the jurisdiction on Tivoli. Anyway Barbarossa wanted that Tivoli was fortified for strategic reasons against Rome. The town regained its former splendour: new city walls were put up and the urban area was remarkably enlarged (later the town was divided into 4 districts: Castrovetere, St.Paul, St.Croce and Trevio).

Tivoli became for some time the stronghold of the Ghibeline party. Between the XI and the XII century many turret-houses were built inside the urban area. These very high, quadrangular constructions, were used both as dwellings and as defence. They were placed in the strategic points of the town. Some beautiful examples can still be admired today in Vicolo dei Ferri, Via del Tempio d'Ercole, Via della Sibilla, Via del Seminario, Via del Seminario, Piazza Rivarola and Piazza Palatina. This place, togheter with Piazza delle Erbe, was the centre of civil, municipal and religious life: there were, and can still be admired today, the Arengo Palace (municipal palace), the Tower House and the Church of St. Michael date back approximately from the same period.
On 22 November 1220 Frederick II (grandson of Barbarossa) was crowned Holy Roman emperor by Pope Honorius III but in 1227 he was excommunicated by Pope Gregory IX for failing to honor his crusading pledge. Relationship between Papacy and Empire made worse. Tivoli supported the Emperor in his fight against the Pope. Roman troops assaulted the Imperial garrison in Tivoli in 1241 and the Emperor soon reached Rome. This back-and-forth situation was repeated again in 1242 and 1243. In 1259 Tivoli lost its independence because of the death of Emperor Frederic II in 1250 and the consequent weakness of the imperial party. The Senate of Rome succeeded (under Pope Innocent IV) in imposing a tribute on the city, and arrogated to itself the right of appointing a count to govern it in conjunction with the local consuls.
To control the people and reduce them to obedience, in 1461 Pope Pius II erected the present castle ((Rocca Pia), a quadrilateral fortress composed of four round corner-towers.