Tivoli in the Roman Age

Tivoli, called by the famous latin poet Virgilio "Tibur Superbum" (Lib. VII Aeneid), is first mentioned in Roman history in 493 when it was an independent member of the Latin League (a confederation of about 30 villages and tribes in the region of Latium, organized for mutual defense) and a rival of nearby Rome.
The Latin League was originally created for protection against enemies from surrounding areas under the leadership of the city of Alba Longa. In 361 BC Tibur allied itself with the Gauls against Roman people. However the increasing power of Rome gradually led to its domination of the league. The renewal of the original treaty in 358 BC formally established Roman leadership and eventually touched of the beginning of the Latin War (343 BC - 338 BC). In 338 BC, following the Roman victory, the league was dissolved. In this period in Tivoli were constructed the square-based defensive walls (in opus quadrata) which surrounded the acropolis and the ancient district of St.Paul (some vestiges can still be seen today). 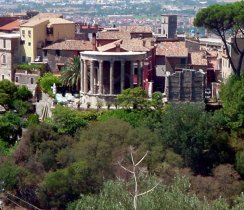 After 338 BC, the end of the Latin league, Rome renamed the cities municipiae and established coloniae inside them. This meant that the towns were now ruled by Rome (or the Roman republic) and that the people living there were considered Roman colonists.
Rome soon had great influence on Tivoli to which it was directly linked by Via Tiburtina, an important street that Romans had to follow to cross the mountain regions of the Apennines towards the Abruzzo, the region where lived some of its fiercest enemies (such as Volsci, Sabini and Samnites).

Tivoli received Roman citizenship in 90 BC and attained prosperity as a summer resort under the early empire famed for its beauty and its good water (mentioned always by the poets Horace and Catullus in their poems). Many wealthy Romans (Horace, Publius Quinctilius Varus Minor, Manlio Volpisco, ecc.) built here owns villas: naturally the most famous is the (Hadrian's Villa.
In 273, near the Acque Albule spring (where Agrippa, architect of Augustus, built the baths Augustus built), emperor Aurelian built a residence for Zenobia, the captive queen of Palmyra. 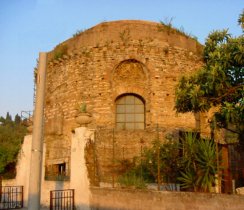 Temple of the Cough

During the II century B.C. the town underwent a radical urban renewal which affected all the most important urban sectors. Were built temples as the (Sanctuary of Hercules the Victor, the Temple of the Cough and, on the acropolis, the two most famous temples of Tivoli: the round Temple of Vesta and the rectangular Temple of the Sybil. During the same period was built the forum in the same place where today stand Piazza del Duomo and the Cathedral of St. Lawrence. One can still see the Augusteum, the Mensa Ponderaria (the Wheights and Measures office) and the traces of a basilica standing behind the abside of the Cathedral.