The origins of Tivoli

There are many legends about the origins of Tibur (1215 a.C.). An ancient story, reported also in the Origins of Catone the Censor, tells that the city derives from a Greek colony, founded by Catillo of Arcadia. Catillo, son of the glorious Anfiarao (one of the Seven men against Tebe), landed in Italy after having escaped from the Ellade thirty years before the destruction of Troy.
Here, as told in an updated story made by Solino (between the III and the IV century), Catillo had three sons: Tiburto, Corace and Catillo. They drove out the Sicilian people, who had constituted the first inhabited nucleus in the zone of the plateau of the Aniene. So they gave to the city the name of Tibur, from the name of older of them. In the following centuries, the Latin people, in order to mean the state in place, used the word Tiburi, rather than "Tibur" and little by little the denomination was transformed in Tibori, Tiboli and finally "Tivoli".
This is the reason why the inhabitants are called "Tiburtini" rather than "Tivolesi". 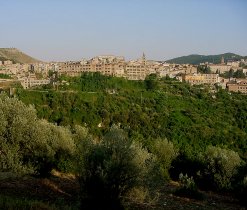 This is the reason why the inhabitants are called "Tiburtini" rather than "Tivolesi". The three sons are reported also in the Eneide of Virgilio, who exalted the exploits of Tiburto, Corace and Catillo engaged in the war against Enea and the Trojan invaders. On the contrary, according to some other legends, the creation of the original nucleus and the foundation of the city was due to the Sicilian people, from which it took the name of Siculeto.

Later it was occupied by the aborigines who gave it the name of Polistephanon , meaning "Crown of the City". A last legend, inspired to the Tyrrheanian tradition, tells about Anio, king of Etruscan people. He died in order to follow her daughter Salia, fugitive for love, (who became the mother of Latin and Salio, prototypes of illustrious lineage) in the river. This river, before called Peretusio, later changed its name thanks to him. Another opinion, shared from various students, believes that the word Tivoli (Tibur and, perhaps, originally, Teibur) comes to the word Teba, that according to Varrone means hill. So, the name derives from the position of the city; since it is on a hill (235 m). Also nowadays, the name hill refers to that part of the city that sets on the precipices of the Aniene. 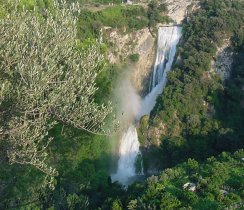 Anyway about the word Tibur, there is a last hypothesis referring to the most characteristic element of the territory: its great fall. According to this, Tibur means city near the jump of the water, linking to the Tiberis term, that is the Tevere, that it is exactly a water course. The first tradition (that one about the construction made by a Greek colony) perhaps the most evocative, it is the one that collected greater credibility by some local scholars.

So the historian Del Re conjectured the foundation of the city in the month of April, when the Greek celebrated the main rituals of the spring. Today the historians conclude that for sure Tivoli was an ancient Sicilian colony, that began to develop only during the age of the iron with the contribution of Latin and Sabine populations and groups of people coming from the Appennines. The year of foundation of the city should be the 1215 b.C., 462 years before the born of Rome. The foundation day is celebrated the 5th of April, resuming the hypothesis of Del Re. In 1985 it has been celebrated the dawn of the XXXIII century of life of the city.