In the area between the Aniene Valley and the Fiumicino Valley (also called Giovenzano valley) there are the Ruffi Mounts, a mountain group of modest height (not reach 1300 m). The term "Ruffi" derives from the last name Romano "Rufus" belonged to this area.
Characterized by many springs, these mounts are frequented by ancient time, crossed by paths of transhumance, witnessed by the location of archaeological sites ranging in age between Paleolithic Age and Metals Age.
Between VI and IV century AD, before the Roman people, the mounts were inhabited by Equi people that were located in the fortified village of Trebula Suffenas (nowadays near the village of Ciciliano). Following the conquest of Romans, in this area were built large country roman villas. 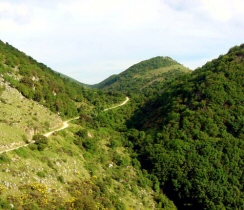 Several artifacts were found in the valley, near rivers or springs, or in shelters in the rock, then likely at staging points or areas suitable for human habitation.
Regarding the fauna the Ruffi mounts ara characterized by several species of animals: the fox, the wolf, the squirrel, the vixen, the hedgehog, the rate and porcupine. Among the important birds are the golden eagle, the hawk and the kestrel, owls and the night owl.

Regarding the flora the undergrowth of Ruffi mounts is rich of beautiful blooms: anemones, primroses, and as well daffodils. Among the wide variety of trees we have chestnuts, oaks, and hazels. You can also find in very few specimens some wild orchids like the yellow orchid and the spotted orchids.
Costasole Mount (1253 metres) is the main peak of the Ruffi Mounts.
Saracinesco is a good starting point for some excellent walks in Ruffi Mounts.