From our starting point you can take the small via Pacifici and, at the end of the small fall, you can carry on in via della Missione, on the left. The way, that takes its name from the missionari fathers of S. Vincenzo de Polis at the Annunziata church, takes you to the small square where is the church, now deconsecrated. In the square via della Missione ends and starts via Mauro Macera. At palazzo dell'Annunziata, there are the small buildings of Sabbi family (XVIII century) and, at number 9, Lino Marazzani building (XVI century), with a valuable portal. A few metres down you can see on the left the Palazzo del Colonnello Realis-Ciaccia (XVI century). Opposite to the entrance there are still now two columns that gave testimony of the immunity enjoyment. 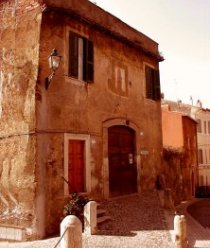 In front of the front of the building there is piazza Colonna that takes its name from the Palazzo at the civic number 7: palazzo Brigante Colonna (XVI century). On the left of the building starts vicolo dei Marzi. You can go across the alley until a small square, then you can turn to right and, after the contemplation of other medieval buildings, also a house and a tower-house, go on in via dei Selci, where at the civic number 10 there is a building of the year 1636.

At the end of the way, you can turn to left in vicolo dei Ferri, a typical medieval way still now, where are evident a lot of tower-houses and S.Stefano church (XI-XII century), deconsecrated in 1872 and transformed in theatre and residence. 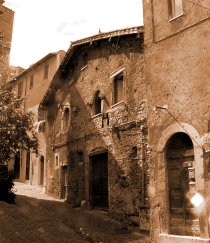 The tower-houses were an instrument of defence and attack; moreover the owner had the title of miles and had the duty to defend the town in the dangerous moments. The clergy also defended the town: it had to fortify churches' areas near the boundary walls.

The face still preserve two columns of the ancient porch with an architrave surmounted by a valuable marble frame, with rose-cut and points of diamonds.
After vicolo dei Ferri you can turn to right and, after a small stretch in via del Duomo e via del Governo, you arrive in piazza del Comune. Welcomes the tourist a fountain carved in the travertine stone, behind the building of the Commune, palazzo S.Bernardino. You can get round the building on the right of the fountain and a few metres later, on the left, you can find the entrance on the square before palazzo S.Bernardino.