From Piazza Garibaldi we can go down beside Via Pacifici and then we'll arrive at Piazza Santa Croce. The square takes its name from Santa Croce door, near the Estensi stables in Largo Garibaldi, destroyed in 1889 for practicability reasons. The square is embellished by a gorgeous gotical mullioned window with two lights, attributed to the sculptor Angelo da Tivoli, mounted in the front of the Serra-Nobili palace (XV century) at the civic number 19.
We can go on into Via del Trevio, Tivoli's main street, a narrow street surrounded by buildings of the XVI century as Palazzotto Cenci-Alberici at the civic number 9. Passed the ex Largo Cesare Battisti, we'll arrive in Piazza Plebiscito or Piazza della Regina, dominated by San Biagio church. From here we can go on along Via Palatina, from the latin Palatium, where is possible to admire, at the civic number 25, Palazzo Fucci (XV century), until to reach Piazza Palatina. 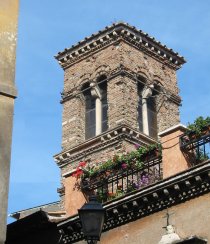 Turning to the left we can go into San Paolo quarter. Welcomes us the characteristic Piazza delle erbe, heart of the communal Tivoli, in which the most important activities of the city life happened: the square was the market place (economic centre); in it there were San Michele Arcangelo church (religious centre), with its wonderful fourteenth century bell-tower, and the building of the Arengo (seat for the public meetings and town hall); a tower-house ruled to defence everything.
From here we cover Via del Seminario, in defence of which was built one of the biggest tower-house of the city.

Also this way is famous for the presence of some buildings of the XVI and XVII century, as those at the civic number 25 and 23, in which there are a lot of frescos and decorations of the XVII-XVIII century. Then we'll arrive to Piazza del Seminario, on which reigns the building of the ex Episcopal seminary. Over the architrave of the main door there is a memorial plaque of the construction of that building and over again the bishop Giulio Roma's coat of arms, who ordered to demolish the ancient church of San Paolo and built here the aforesaid building. 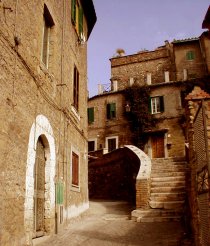 From here we come back in Via del Seminario, until meet, on the right, Vicolo Scalinata, a street with steps of the roman age which takes to Piazza Selci.
At the half of the stairs, on the right, we'll take for Via del Tempio d'Ercole, a way full of buildings of the middle ages, excepted Palazzo Coccanari-De Fornari, at the civic number 5, of the XV century.
The building, nowadays under repair, was ceded by the Coccanari family to the Tivoli's Commune to use it as a library.

We meet on our left another tower-house, built at the corner with Via Canonica near the ex S.Alessandro church. We can descend in Via Canonica, so arriving to Piazza del Duomo. We overtake the Mensa Ponderaria, the Augusteum and the Cathedral, then the Macello's arch and, going to the right, we arrive in Piazza Domenico Tani.