The building, for some time seat of the Commune, rises, in square works, on the ancient boundary walls (V-IV century before Christ) and uses some medieval structures as the tower on the left of the main face. 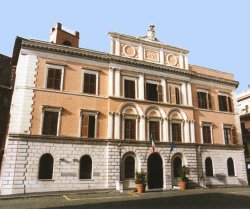 It became property of the Commune in 1587 after a gift of Sisto V for half and for the other half after a payment of 1000 scudi, S.Filippo Neri's loan. The main face was quite restored in 1883. In the building there are valuable paintings and sculptures, first of all the altar piece, made by Sano di Pietro (1406-1481), representing S.Bernardino, that gave the name to the building.
Now you can take again via del Governo, on the left of the building and you can reach piazza del Plebiscito. You can cross the square and go on in via Santa Viola.

Go straight on in via Colsereno. You have to go beyond, on the left, palazzo Carlandi (XVI century); on the left there is the small square of S.Vincenzo, with the deconsecrated church dedicated to the saint. 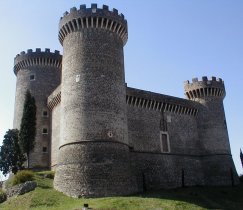 It shows an interesting gothic face with a big rosette and it's famous for its cave where, perhaps, the martyr S.Sinferusa had hidden to escape Adrian's persecution.
You can go on in via Colsereno as far as to meet via Inversata. This way was built when Villa d'Este was made, in1550. In fact Ippolito II ordered to build here the houses that were been demolished to erect his Villa d'Este.
The name of the way depends on this reason: the rebuilding was in the opposite order compared to the demolition, so the first rebuilt house was the last demolished house.

From via Inversata you can arrive to Largo Salvo d'Acquisto, where the tourist can finally see Rocca Pia, impressive upon the ruins of the Anfiteatro di Bleso. Now you can run along the side of the amphitheatre, coming down in via Aldo Moro as far as Largo Garibaldi, the starting point.