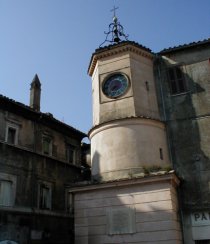 The typical square-based medieval turret-house was created to be used both as dwellig and as defence.
It was built in the strategic points of the town, at the corner of the streets, at the crossroads etc, in order to have a better view in case of attack of the enemy.

The construction did not have a front door on the frist floor but simply some windows on the upper floors which could be reached through a retractable ladder of wood.
On the top floor there was the covered roof-terrace, an open portico used to store the food to be used in case of siege. 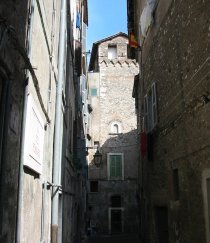 Turret-house in Via del Seminario

There were many turret-houses in Tivoli; nowadays about one hundred of them still exist. Even if they are hidden by the walls built afterwards some of them can still be admired in Via Platone Tiburtino, Via Postera, Via del Duomo, via del Colle, Via della Sibilla.