The Monastery of St. Scholastica rises up just a short distance from the Sacro Speco, at the foot of Mount Taleo where two valleys meet and above the place where was the highest of Nero's lakes.
It is considered to be the most ancient Benedictine monastery in the world and it is the only monastery of the twelve ones wanted by St. Benedict along the valley of the Aniene not to have been destroyed by earthquakes (1216, 1227, 1299), or the Saracen invasions in the 9th century. 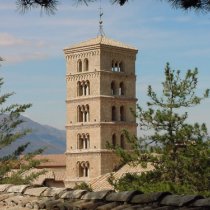 It is a building complex built in different times and styles which includes three wonderful cloisters (Renaissance, Gothic, Cosmatesque), a church, rebuilt in the Neo-classical style in 1769, the Romanesque bell tower, a hostel for pilgrims and a library which contains copies of the first books printed in Italy in 1465. The archive holds around 3600 parchments and thousands of different documents. 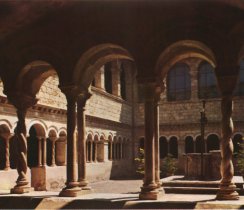 The XX-century styled entrance, above which the Benedictine motto "Ora et Labora" is written, leads to the first or Renaissance cloister, which goes back to the XVI century. Through it one enters the second or Gothic cloister, of the XIV century. Passing along there is the third cloister, the most beautiful in Cosmati style, dating to the 13th century and work of Cosma and other Cosmati-style masters, constructed with materials partly originating from Nero's villa.

The powerful Romanesque bell-tower, that dominates all, goes back to the XII century, while the present church to the XVIII one; the latter is the last of five churches built: sober and harmonious neoclassical structure, with a Latin cross layout. The Church was built in 981, restructured in gothic style during the 13th century, and its interior was renovated later in accordance with Neoclassical taste. The portal of the church is Gothic too. The Façade, which was bombed on 23rd May 1944, has been reconstructed in a sober and austere modern style.