San Polo and the Orsini-Cesi Castle

San Polo dei Cavalieri is one of the most picturesque mountain village, situated in the Monti Lucretili Regional Natural Park on a lofty hill at a height of 650 m, about 40 km from Rome and only 12 km from Tivoli.
The village is located in the same place where the ancient Castrum Sancti Pauli (a fortification around with a bell tower) was founded by Knights of the Order of Malta that in the 11th century gave way it to the Roman monastery of San Paolo Fuori le Mura. Due to its strategic position in 1100 it was played between the lords of Marcellina, Montecelio, Palombara Sabina, Tivoli and the monks as long as in the 14 th century Pope Boniface IX gave it to the Orsini family in recognition of their service to the church. 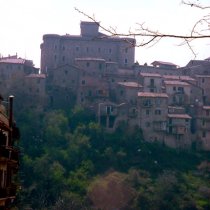 View of the orsini-Cesi Castle

This family rebuilding the ancient Castrum and transformed it into an efficient military fortification. In 1558 the castle and its lands were sold to the Cesi family. The Cardinal Federico Cesi transformed the Medieval castle into a summer fortified palace, with a rectangular structure with four semi-cylindrical towers at the corners. In the courtyard is still the ancient octagonal cistern decorated with columns and coats of arms of the orsini family.

All the apartments where decorated with paintings attributed to the Zuccari brothers (Federico and Taddeo) school (who then also worked on the Villa d'Este in Tivoli) with mythological scenes, landscapes and coats of arms of the Cesi family. Here, in 1603, it established the first headquarters of the Accademia dei Lincei, founded by Cardinal Federico Cesi, an excellent botanist. During this period Galileo Galilei, friend of the Cardinal and amongst the members of the Accademia, was hosted in the castle. 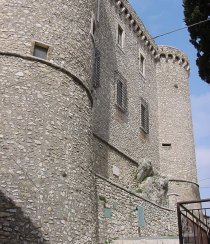 The Cesi family maintained control until 1656 when a plague epidemic decimated the population, reduced to 377 souls. It was then ceded to the Borghese family and it was at this time that 'dei Cavalieri' was added to the name, perhaps because knights of St. John passed that way. San Polo became part of the Papal State and, in 1870, an independent community.

Today the castle is owned by a private individual; it is sometimes opened for public functions and can be visited on these occasions. Near the castle there is the recently Prehistoric Museum which houses many interesting exhibits. The museum is open on Saturday and Sunday morning.