Publio Elio Adriano was born in 76 d.C. near Seville, in Spain, in a family that originally came from Hadria, in the Piceno; remained fatherless, he was adopted by his uncle Traiano, emperor of the senatorial dynasty, also said Antonini's dynasty. To its command from the 101 to the 102 d.C., he made part of the General Staff of the army, then was "tribuno della plebe", then "pretore", later, in 107, governor of the Pannonia, and from the 114 of Syria. 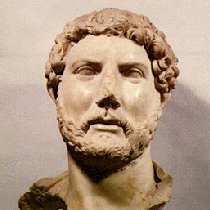 Here he came to acquaintance, in the 117, of his election to emperor, because of Traiano's death; his choice was due both to his fulminating career and to the support of Plotina, widow of the defunct predecessor, of which it seems he was the lover.
She smoothed his way, giving precious advises and even guiding him in the wife's choose (around 100 d.C. get married to Vibia Sabina, Matidia's daughter, grandson of Traiano) but she couldn't prevent that Adrian found obstacles in his relationships with the senators, with which he was forced to negotiate, while he earned the favor of the army giving big donations.

Like Traiano, he was immediately dedicated to resolve the military problems, left unsolved by his predecessor, to difference of which he chose a substantial strategy of defense and control of the borders of the empire instead of great war enterprises, and he strived to make one good and efficient bureaucratic organization of the State. The review and the simplification of the laws and the bureaucratic mechanisms, to which he gave to beginning, allowed him to dedicate personally to many collaterals activities.

Where it was necessary he was placed to the head of the garrisons, gave victorious battles and studied all the logistic necessities with the experts. He constructed bridges and roads in Gallia, reorganized the garrisons in Germany and he constructed a large defensive vallum in Britain, the vallum Hadriani. He was a man from the solid philosophical and poetic culture, skilful in the arms and good politician, like he had been able to show in the assignment of governor of Syria.

For a long time he had been prepared to take on, a day, the maximum charge: with patience he had pleased Traiano, reaching also drink the wine he disliked, as he had scrupulously studied Latin to overcome his provincialism and with the purpose to write the official speeches that Traiano held. His conjugal union was not very happy, so that Adriano, if he had been able, he would have divorced. He didn't trust in the personal court of which his wife had been surrounded, fearing a conspiracy against him; the relationships with Vibia Sabina became so tense that, when she died in 137 a.C., people began to accuse him of uxoricide. For this reason, disappointed, alone and sick, he lived isolated and he died the following year, designating like successor Antonino Pio who had great trouble to exceed the hatred of senators against Hadrian in order to make deify him.