The Complesso Conventuale di San Cosimato, near Vicovaro, in the narrowest point of the valley of the Aniene which, as long ago as the V Century, was an area already frequented by hermits who followed rules of oriental inspiration. 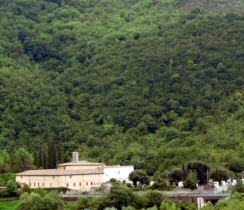 View of convent of S. Cosimato

A visit to it really takes one back in time. Here, in a place of such mystic atmosphere, amongst cliffs and cyprus trees, in about the year 500 an oratory dedicated to Saints Cosma and Damian was built upon the ruins of an ancient
Roman villa, which was to be the nucleus of the church built later. Next to it was built the monastery which suffered destruction at the hands of the Longobards and the Saracens, but which was always rebuilt and which had periods of great power and splendour.

In 1680 the convent was passed from the Benedictines to the Franciscans. At about the same time alI the frescoes which decorated the portico and the chapel were lost and, in 1727, the convent itself was completely rebuilt. Today we can there admire frescos of the XV Century and a gothic style chapel with a cross vault. 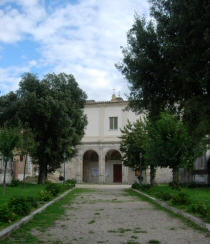 Two of the three lunettes of the portico painted by
Antonio Rosati (1670) illustrate a legend according to which the church was constructed in the place were Charlemagne defeated the Saracens. Another legend, which concerns Saint Benedict from Norcia (480-circa 547) tells that, the fame of the saint having spread, the monks of San Cosimato invited him to put order into the life of their hermitage after the death of their abbot. The saint accepted, but the rules he imposed were too heavy for some to the point that they decided to poison his drink. When Saint Benedict placed a benediction upon it, the chalice miraculously broke spilling the wine on the floor and staining a stone which was put in the caves where the monks carried on their monastic life and which can still today be seen.

The caves of San Benedetto and the saints look out from a rock face which drops down to the River Aniene and are linked to the monastery above and to the river below via a complicated system of tunneis and stairs cut out of the rock which form a truly special sight.