The Sacro Speco or Monastery of San Benedetto

As we go up the road to Jenne we reach this impressive complex of buildings which almost looks as if it is one with the surrounding rock, as it includes two caves: the upper cave where the saint retired in prayer for three years, and the lower one where he used to receive shepherds, connected to each other by the Scala Santa or Holy Staircase. Apart from the very faded frescoes in the Grotta dei Pastori (IX C.), in which the oldest image of the Madonna in the whole area is kept (VII C.), the monastery can be dated around the XIII Century. 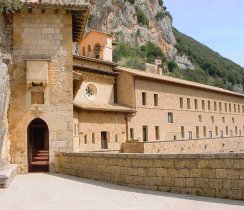 The two superimposed churches are worthy of special attention: the upper church has frescoes painted by XIV and XV Century by artists from Siena which, amongst other things, depict episodes in the life of Jesus and Saint Benedict (Il Miracolo del Calice di Vicovaro). From here we can enter the lower church which is on various floors and also has beautiful frescoes of the Roman school, some of which signed by one Conxulus.

In the cave of Saint Benedici there is the statue of the saint by Antonio Raggi, a pupil of Bemini, whilst in the Cappella di San Gregorio, dedicated to Pope Gregorius who wrote the saint's biography, one cannot but notice the powerfully expressive figure of Saint Francis without stigmata and painted almost natural size. On a different level there is the Cappella della Madonna with frescoes depicting the story of the Virgin by painters of the Sienese school.