The Abbey of San Giovanni in Argentella

The abbey of San Giovanni in Argentella is situated near Palombara Sabina, about 2-3 Km from the town centre. The name of this abbey would seem to derive from silvery waters which ran down from the surrodings hills.
The abbey was founded in the IV century probably by Basilian monks from Greece, in the place where there once was one of the many ancient roman farm-villas of the area and from which were taken many of the roman remains we can see today built to its structure. 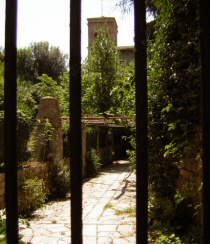 Abbey of San giovanni in Argentella

Situated in a well fortified and powerful looking building, the abbey owned much of the sorrounding land, above all in the X and XI century, thanks also to its strategic position along one of the principle itineraries of transhumance.
It was modified across the centuries to the extent that little is left of the original building. The church we can admire today, thanks to its restoration in 1984, is an edifice which is clearly archaic romanesque in style with a beautiful and austere exterior made of irregular yellow tufa stone blocks which give it a severe and solid appearance only slightly softened by the presence of pilasters and arches.

Similarly, in the interior the slim ionic columns, certainly once part of ancient roman buildings, lend a lighter touch to rather severe mysticism of the whole. The chapel dedicated to the Virgin and decorated with mosaics is probably XII century, whilist the splendid ciborium at the main altar dates back to the VIII century. 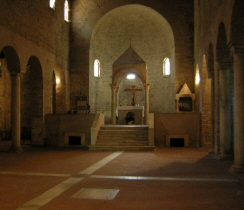 It’s decorated in white stucco work and supported by small marble columns which are certainly of ancient roman provenance. What are of great interest are what is left of the frescos, which date back to the XIV century and probably covered the whole of the inside of the church, depicting historic events connected to the Cistercian monks, and the ornaments in polychrome mosaics which are probably the work of the famous XII century roman marble creftsmen known as the “Cosmati”.

The steeple, which towers over the surrounding vegetation, is also romanesque in style. The medieval convent nearby is instead in dreadfull conditions.
The abbey was recognised as a national monument in 1895 and it’s visible thanks to the service provided by the Fraternità Ecumenica Laica.