Pope Simplicius ordered the church to be built over the ruins of a roman villa. In XII century it was enlarged and radically trasformed when Barbarossa decided to include the built-up area into the city walls. 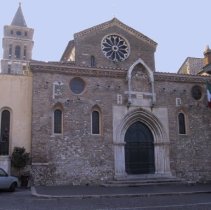 Later on, in the XV century, the lateral arches were closed and replaced with, round windows, whereas the central arch at the entrance was enriched with a beautiful gothic portal surmounted by a tabernacle, attributed to the sculptor Angelo of Tivoli. On the right side of the church is the bell.tower rebuilt in 1590.

The high altar, built by the architect Galvani at the end of 1500, contains a valuable paiting on wood of the Madonna delle Grazie, made by the franciscan painter Jacopo Torriti in 1200.