Weights and Measures Office and the Augusteum 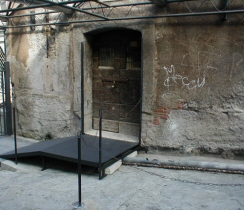 It was not, however, these artisans who built the Mensa Ponderaria but a free slave, Marcus Varenus Defilus, who had made fortune. Marcus Varenus had furthermore two statues of his patrons placed before the tables, the bases of wich can still be seen. On one side of the Mensa Ponderaria, he built a chapel in honour of Augustus, used for the imperial workship: the Augusteum. In the center of the apse, there is a base for a statue, wich cannot have been that of the emperor, as can be clearly seen from an inscription found there.