Frascati is an Italian white wine from the region known as Castelli Romani, nine communes (including just Frascati, called "the city of wine") that produce wine in the Alban Hills, which are just south of Rome. In this place it's demonstrated the cultivation of grapes for wine since the 5th century B.C. If there is a wine that is synonymous with Rome, it is Frascati. It's characterized by a yellow pale in colour with golden glints, with a winy nose, tasting fruity and full of body, with aromatic flavours of ripe fruit.
Also called "Golden Wine" for its color, in 1966 "Frascati" became one of the first Italian wines to be awarded the "D.O.C." classification of guaranteed quality ("Certified Denomination of Origin").Under DOC laws, it's made from Trebbiano, Greco and Malvasia grapes and can made in either a dry (most popular) or a sweet style and either still or in a Spumante (sparkling) style. 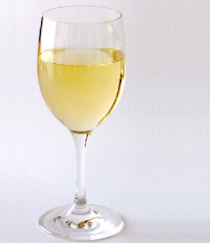 This wine is so famous that it is included in the stock of vintage wines of Buckingam Palace.
Traditionally, Frascati was produced harvesting the grapes after the first ten day of October. Stocked in barrels which were stowed in caves dug in the tufa rock, after successive decanting, it was ready to be drunk in spring.

The better places where taste this wine, together with the famous porchetta, the "cantine" or "fraschette", essentially places where you can buy and drink wine, and can bring your own food.