Famous since ancient times, especially from the time of emperor Augustus, the Acquae Albule are the most copious sulphur springs of central Italy. They are a group of springs, located 4 miles West of Tivoli's center and rises at a temperature of about 24° C. They are a strange (and smelly) bluish-greenish-white due to the high mineral content strongly impregnated with sulphur and carbonate of lime, hence the name, which means "White Water" (it got from Latin albus, "white"). 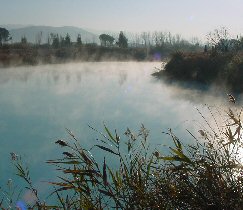 Lake of the Queen

The Romans built here a roman thermal establishment, collecting the water into canals and subjected it to a scientific hydraulic regime. The baths, wanted by Augustus, that was suffering so seriously from rheumatism, are known as Baths of Agrippa, architect of the emperor.
The ruins of the bath are still visible near the principal spring, the so-called Lago della Regina ("Lake of the Queen"), which is continually diminishing in size owing to the deposit left by the water.

In ancient roman times the water are famous for their reputed healing properties and ability to cure diseases and were believed especially helpful in mending broken bones. The waters were both used for bathing and drinking as a tonic.
Several dedicatory inscriptions in honour of the waters have been found: the waters themselves were honoured as "Aquae Albulae Sanctissimae", especially by Strabo and Pliny the Elder. 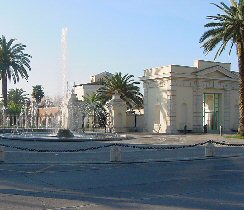 After the glory known in imperial period, the Baths of Agrippa were slowly forgotten. The Acquae Albule were allowed free play from the first barbaric invasion up to the sixteenth centuiry, when Cardinal Ippolito II d'Este gathered them again into the channel which takes its name from him, and which nowadays is in use.

In modern times most of its waters are diverted to the modern Terme, not far from where the ancient roman baths were: the waters are still used today for bathing, in treating bone diseases; the fumes are breathed in as a cure for lung problems.