Also in this case, like for the Fountain of the Organ, there is a hydraulic device that, taking advantage of the fall of the water, allows to an artificial owl to approach the bronze little birds on a branch, to frighten and to stop them twittering. The twittering had been realized taking advantage of the push of the outgoing air from the beak of the birds. These devices, hidden in the fountains, were invented to astonish the hosts of the Cardinal. 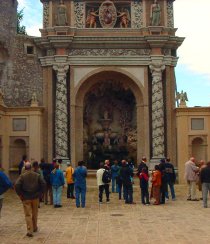 Like in the case of the hydraulic organ, also here the sonority of fountain has been recovered. In the center, there is a niche

with a fountain and the water comes down from two levels forming cascades. Everything is placed between two columns on which grapewines and gold apples rise, reminding once again the gold apples that Ercole had embezzled to the dragon Ladone in the garden of the Esperidi.
On the top in the center,

the shield of Ippolito II is placed.

It is supported from two angels and near them, there are two feminine statues. Instead, the highest part of the monument is adorned with two big lilies and an enormous eagle, all symbols of the d'Este family. The space in front of the fountain is delimited from a wall, also this one adorned alternatively with lilies and eagle. It presents some niches of different dimensions that allow the access to the other avenues and fountains.