The Temple of Venus

It's a small dorico and circular temple, advanced on Tempe's valley, that preserved a copy of Aphrodite Cnidia, carved by Prassitele. The statue, accommodated until little time ago in the ancient chapel annexed to the Casino Fede (XVIII century), is now in the Antiquarium museum located close to the Canopo. Instead of it, inside the temple there is a cast. It is worth noting that the rests of the pavement, realized in sectile work, decorated with various designs in several rooms of this Nymphaeum are constituted by semicircular esplanade on which were this small temple, in axis with the entrance, to the sides of which two apses with the fountains standed. 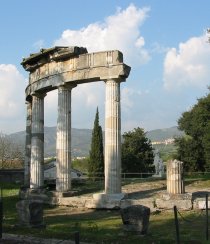 The Temple of Venus

All the complex is clearly a copy of the Greek tholos, that guarded the Prassitele's original Aphrodite. In the sostruzioni of the building is annexed a basolata way with functions of service, covered with barrel vault, that takes light from openings in the ceiling.
The road, used for the passage of the wagons, can be travelled over for approximately 40 meters and traces the distance of a previous route of the republican age.

The complex however, because of the jobs completed in the XVIII century for the construction of the Casino Fede, risen on one of the two apses, incorporating it, and consequently destroying its structure, supplies a partial image of the ancient building, although in the Fifties the four columns with the trabeation resting on them were reconstructed, using the original rests of the monument.