The building, so called since the ' 700, is one of the most famous and evocative buildings of the Villa. The main entrance was turned to north side, located in front of a green space near the Libraries' garden and joined with the inferior Terrace. It is constituted by a central part with a round plant preceded by a rectangular pronao, of which the bases of the columns remain only, and from which you came in the hall, embellished on every side by a rectangular niche, and finally through an axial entrance you reached the circular porch, supported by ionic columns and covered by barrel vault. 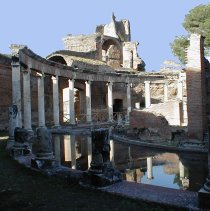 The colonnade is reflected in waters of a channel that encircles an artificial island, originally connected by two revolving wood structures, while now is placed here a bridge in masonry attributable to the late-ancient period.
It's possible to observe marble-furrows of the guides in which these wood-bridges housed for the sliding.

The two revolving bridges stayed near the entrance corridors, fauces, situated externally of a curvilinear entrance resting on fluted columns ionic. On the island the small inner space is optimally utilized: has been created a domus with the typical outline, with entrance hall, triclinio (the room for the lunch), cubicula (bedrooms), latrina and also small thermes.
In fact it's a residence in miniature, theoretically inaccessible from the outside, destined to the emperor's retreat and reflection: he loved to swim in the channel, going through it more times. 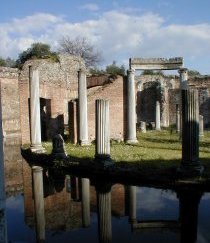 The building is exemplar for its technical innovations: the continuous succession of straight and curves lines, the particular height of the columns and the trabeations, the effect played by the light and the refraction in the channel of the light architectonic elements, create an absolutely particular spaces and scenic effect. The singularity of this structure, its same conceptual value of "island", the wealth and the cure for the details, let's imagine the Hadrian's direct participation to the plan of this building.