The tower of Rocca Bruna

The isolated tower rises at the extreme north-west of the terrace facing the valley of Risicoli. The walls were obtained by alternating a row of bricks with rows of small rectangular tufa blocks (generally two). Externally it looks like a parallelepiped with the entrance placed in the west, framed by two large semi-circular niches. The inside is a hall with an octagonal plan and with big rectangular niches similar to alcoves and opened on the north, east and south sides: the remainirg sides are occupied by semicircular niches. 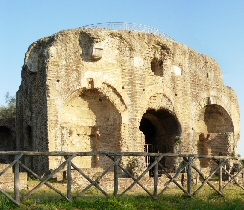 The tower of Rocca Bruna

On the floor are traces of a design in polychrome marbles (opus sectile) set to form a pattern of concentric circles.
The hall is covered by a cloister dome, set on the arches of the alcoves. Originally there was a second floor that externally must have looked like a circular pavilion composed of 16 Doric columns that surrounded a wall and carried a cupola. The interior probably had the same octagonal plan as the ground floor. The upper hall could be reached by means of a ramp.

Due to its massive structures, presumably it also had a third floor, which today is completely gone. In the course of time, the tower has been modified: three sides of the ground element was surrounded by a low portico with a forepart covered with a sloping roof. The Jesuit Fathers, once the owners of Roccabruna, created a chapel in the north-east pillar reachable from outside. At Hadrian's time the building was probably a belvedere, since it is positioned on one of the most panoramic spots of the villa. 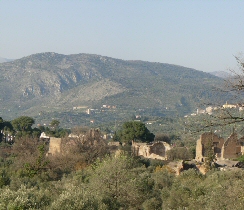 View from the tower of Rocca Bruna

From the Tower top the Roman countryside stretching to the sea could be seen on one side, on the other side the Mount Soratte and the Lepini Mountains. The deep interest Hadrian had for astronomy, makes us believe that the Tower of Rocca Bruna might have been used as an astronomic observatory.

The tower resembles other buildings that once existed in Rome: the most well-known example is that of the Tower of Maecenas that rose in the gardens of the Esquiline, from which Nero was said to have watched Rome burning. A tower used as a signalling point or lighthouse existed in emperor Tiber's villa at Capri.