Villa Adriana turns out to be the greatest villa never belonged to a roman emperor, testimony of the extraordinary level of ability caught up from the roman architecture. With a perimeter of 3 Km occupied an area at Villa Adriana is the biggest villa belonged to a roman emperor; it is the token of the great level of skill reached by roman architecture. It had a circumference of 3 km and covered an area of least 120 hectares, in part constructed, in part arranged to garden, not all archaeologically enquired. Risen on the place of one previous republican villa (end II century - beginning I century a.C.), perhaps reached emperor's property like dowry of his wife Vibia Sabina, it always remained the heart of the imperial residence. It seems to be a true city with garden, swimming pools, fountains, nymphaeums, porticos, warm and cold baths, gymnasiums, an hippodrome, a stadium, theatres, basilicas and temples, beyond to the barracks of the firemen and of the imperial guards, lodgings for employees and for the service staff, more sumptuous buildings for important hosts and others for diplomatic mission, to exclusive use of the court and the emperor. 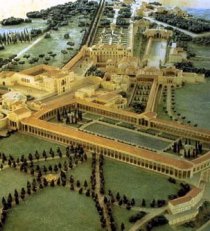 Plastic model of the Villa

Returning to the republican villa, it must be said that its more ancient structures are in uncertain work and go back to the final period of the II sec. b.C. while the following extensions or remaking are datable first half of the I century b.C. and they are in reticulated work. In the ground floor is gained a rectangular criptoportico, to which it was approached by steps from the advanced plan: it would have been paved in mosaic in the second period, when a second criptoportico was added.

From the opposite side to N.-W., beyond an empty area, a ninfeo was placed, with seven niches; of great complexity was the architecture of the first floor, much rearranged under Hadrian: we can find here Hadrian's library (a square place), a basilican hall with three naves, that remembers the basilica of the Domus Flavia on the Palatino, perhaps destined to the reunions. 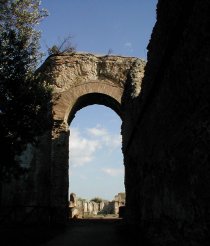 Entrance of the golden Court

The Villa extends at the slopes of the tiburtini hills, a zone that since the republican age were considered an holiday place, such that built their villas here, among the others, Cesar, Catullo, Orazio and Mecenate.
Been born from the multiform and versatile talent of Adrian emperor, it was realized in two successive phases from 118 to 133 a.C.; not in three phases, as in accordance with Bloch's thesis, founded on the study of the stamps of the bricks used in the construction of the several buildings.
The two phases of contruction and the relative buildings can be so synthetized: