This complex, in the whole sufficiently well preserved to allow its architectural and functional reconstruction is positioned in the area of the villa to the south-east of the Pecile, between the Vestibule and the Stadium, oriented like the Great Baths and in line with the way leading to the Canopus. Its name obviously derives from the necessity to distinguish it from a nearby building similar but larger. Both mentioned thermal baths, built successively to the Baths with Heliocaminus, are attributable to a phase of expansion of the villa. The existence of two baths so close to each other has lead scholars to question their different uses. Some have surmised that one was reserved for women (Little Baths) and the other for men (Great Baths), while others that they were assigned to different social categories, etc. However, the present state of our knowledge is insufficient to fully ascertain any of these proposals. 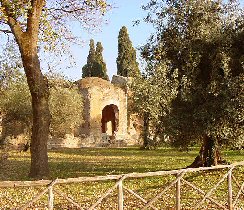 The suggested date for the construction of the Little Baths is the period between 121 -126 AD, but it has not been proved for sure.
The plans presents an unorthodox composition and internally has a surprising variety of original solutions which externally are visible only on the south side. The other sides instead, appear rectilinear and articulated by niches and windows.

The building is surrounded by courts adorned in various ways (exedrae, gardens, etc): the north court which has still to be dug up, was probably a garden, the south court a service area. To the east, the way that connected it to the rest of the villa, crossed a barrel vaulted cryptoportico. Inside, the architectural order is renewed to favour the elasticity of the walls.
The building is brightly light by means of large windows and thanks to the different heights of the roofs. In such a way, the windows of the inner rooms with higher roots were opened above the extradosses of the domes of the external rooms with lower roofs. 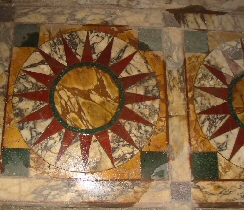 The main structures are in bricks, the rest in opus mixtum. With the exception of the hall, which was roofed in wood and tiles, all the other rooms were covered with various types ot vaults (barrel, spherical and semi-sphencal) with round, semi-circular and square oculi.The rooms with fragments of plaster and marble decorations, were instead used for the different thermal practices (massages exercises, etc).

On the west side are the heated rooms, furnished with a service corridor that connects them to the praefurnia (furnaces) positioned at a lower level, which could be reached by means of a stair starting from the south courtyard. The different and rich solutions adopted for the vaultings and the decorations are clearly recognizable. Instead, today it is difficult to distinguish the calidarium from the tepidarium, since all the rooms have the elements for heating.