The complex is so called on account of the richness and amount of archaeological finds discovered here in the course of the researches carried out from the 16th century. The Piazza d'Oro represents a monumental and refined conclusion of the Villa towards the south. The building consists of a peristyle, that is an uncovered rectangular colonnaded court (61 x 51 metres), with a long basin at the centre flanked by two hedges. These are enclosed with walls provided with projecting bodies, that once carried statues. Each of the wings ot the arcaded court is divided into two aisles by Tuscan columns alternately in cipolin and green Egyptian granite. The outside main colonnade contributes to carry the wide roof inclined towards the garden. 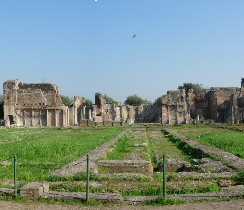 The perimetral wall of the portico has a series of small blind arches placed upon protruding pilasters and scanned by small columns that bear the trabeation. In correspondence to these blind arches, on the side facing the court, are open arches placed on pillars, decorated with small brick columns. The rear wall of the portico was once faced with piaster and paved with marble tiles.

Externally, along the east and west wings of the arcaded court, two long windowed corridors, roofed with a series of cross vaults and floored with marble tiles, can be noted. Through the eastern corridor, thanks to a curvilinear colonnade, a big niche flanked by two corridors looked onto a basin that dominated the Valley of Tempe. An articulate peristyle, with an octagonal shape with alternately concave and convex curvilinear sides scanned by two columns, opens onto the south side of the Piazza d’Oro (the Golden Court). 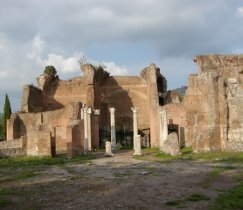 Nymphaeums are placed in correspondence to the convex sides, white from the concave eastern and western sides, by means of two mixtilinear atria, elegant rooms with walls covered with marble could be entered. At the end, situated on the central axis, is a monumental semi-circular vaulted numphaeum, that has alternating curvilinear and rectangular niches, that contain fountains.

On the whole, the nympheum creates the atmosphere of an elegant grotto. It is surmised that, due to the structural and scenographic character of this part of the complex, that it was probably used as a triclinium in the summer. The highly evocative play ot water gushing from the monumental nymphaeum, running along the central basin and supplying the fountains in the garden, then disappearing underground before reaching the Vestibule, should be noted. The sound and scenic effects deriving from such an installation must have made the stay especially pleasant.