In it we recognize the Pecile

remembered by the sources, inspired to the famous Stoà Poikile in Atene, that received the artistic productions of the greatest Greek painters. It is a monumental four-sided portico, delimiting a garden with big central swimming pool.
The northern part, of which we conserve the whole wall 9 m high

and a monumental entrance in the center in order to allow the access to people that came from a northen road, was constituted by a double porch, like is testified by the sottoplinti situated on two sides of the wall, on which rested the columns, today lost and then replaced by box-tree cylindrically pruned. 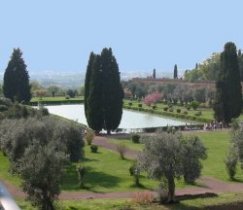 The colonnade's cover was constituited by a double layer, this fact is manifest observing the big holes present in the wall. Turning seven times around the wall, 2 miles were covered (3 km approximately), the perfect measure of the after lunch walk, according to the roman medicine's orders.
In the XVIII century, really, was found a registration in which you can see the norms for an healthy walk.

In a following moment, that is in the second constructive phase of the villa, were added the rectangular bath-tub 100 m. x 25 long and the other porch's arms of a convex state with a green space.
The area, connected by stairs with the surrounding areas (the Philosophers room and maritime Theatre on one side, the building with three esedre, the Nymphaeum/stadium, the building with fishpond on the other side), was devised like an "isolated" place, ideal for the meditation, becouse the high walls that enclosed it prevented the sight of the rest of the villa and isolated people who lives apart here, looking for solitude.