Very close to the Greek Theater, is another complex traditionally called, mistakenly as it now turns out,the Palestra (Gymnasium).
The designation "Gymnasium" is traceable to Pirro Ligorio (the napolitan architect who first studied Hadrian's Villa), and based it on the discovery, in the 16° century, of alleged red marble statues with shaved heads crowned with olive leaf garlands. 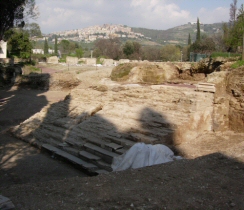 The excavations of the so-called Gymnasium, carried out by the Soprintendenza Archeologica del Lazio and began in 2005, have confirmed Ligorio's description. It's a vast complex (100x80 m) of buildings shown in the diagrams drawn by F.Contini (1668) and F.Piranesi(1781).

According to Ligorio's description there are a vast rectangular room surrounded by a double portico with pillars, a courtyard with a portico, a roof garden with a fountain in the center and a hall with three naves separated by columns, used as a vestibule for the three "noble halls" in back, two shaped like a Greek cross and one rectangular, that opened onto a garden enclosed by a spectacular nympheum wall, were brought to light. 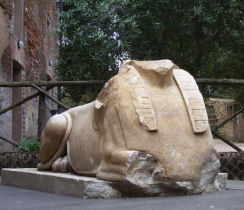 Experts now think it was probably the original entrance to the sprawling complex.
Near the staircase (8,5 m wide) leading to the three-nave hall a valuable, life-size statute of a sphinx dating to Hadrian's period was found, unfortunately without its head (perhaps Antinous' features) and hindquarters. The sculpture was placed there in the 18° century, but perhaps it was already part of the staircase decoration in ancient times.

A statue of an athlete and a huge theatrical mask, both in marble, have also been found at the site.