Constructed near the area occupied by the republican residence and joined to it by a corridor, they are the most ancient thermal complex of the villa and must their name to the circular room covered by coffered vault with a central eye ("lumen" closed by a bronze clypeus that increased or diminished the watery vapor, set in action from chains), heated by the sunbeams (for this reason defined Heliocaminus) and used to take sun baths as Plinio remembers. The room had, on the south - western side, great windows with glasses of modest dimension fixed among them with taps of lead to the iron or bronze frame of the great opening because Vitruvio prescribed that the exposure of the thermal buildings had to respect this exposure to be able to take advantage of the baths in the hours of the afternoon (preferred by Romans to frequent the thermes). 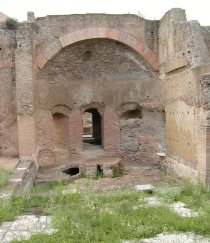 Today they are collapsed. Recent studies show the presence of openings (bocche di forno) in the walls and in the pavement of the room, to integrate the warming of the same room and to allow the letting of watery vapor necessary to make the sauna; therefore we can speak of sudatio. This last one was a circular room having along the walls masonry banks used like seats.
The watery vapor, under those circumstances, as we said before, came from the mouths of furnace, but in other places, as for example in Ercolano, was obtained through stoves, in others, for example in Baia, taking advantage of the vapors present on the ground.

Behind the heliocaminus there are the rectangular frigidarium (having a swimming pool encircled by a porch with columns and a second semicircular bathing-pool) and the calidarium (strongly warmed ambient, provided with bath-tubs for baths). The complex belonged to the noble part of the villa, as it is demonstrated by the traces of the paving and of the marble walls, while the corridors and the circular warmed room had the paving in mosaic not decorated.