The one hundred rooms

In order to exceed the difference in height with the underneath valley, that catches up a height of fifteen meters on the western side of the villa, and to obtain an immense esplanade for the construction of the Pecile, was realized a complex system of buildings, constituted by rooms contiguous and overlapped until four plans. 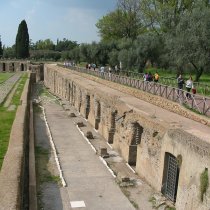 The one hundred rooms

These "Cento Camerelle" were enough modest, clearly destined to be the rooms of the service staff, like testified by the latrine presence; however some rooms, being extremely close to the road suitable for vehicles (that with an underground way directly reached the Terme's service premises), were also used like stores, in order to conserve all that was necessary for the villa.

There was only an entrance to the camerelle, that each of them had frontally, facing on external galleries in wood, joined together by a stairs. These places were extremely poor: they had a wood pavement and an insufficient light coming from the only door-window.