The quarters of the Vigiles

The building was given this name because it was once thought to have been the quarters of the Vigiles, a detachment of soldiers that operated as a fire brigade. Such a use had been proposed on account of the similarity noted between this construction and that of the Fire Brigades' Barracks found in Ostia, whose identification is certain. But, based on its architectural and structural characters, the building seems to be, instead, a part of a horreum, that is a warehouse. According to another theory, it could have been a residential quarter of the staff employed in services at the villa. The building is located In the heart of the villa, but its orientation is dissonant with that of the major axes of the layout of the complex: evidently the so-called Barracks had originally been positioned at the edge of the palace which, however, was later enlarged. 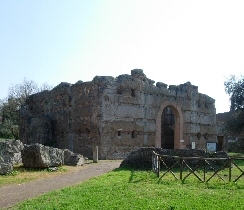 The quarters of the Vigiles

The construction's modest architectural values were therefore hidden by the curved wall of the hall annexed to the Hall with the Doric Pilasters. The plan of the building is extremely simple: it is composed of two groups of three cross vaulted rooms, that are symmetrically distributed around the two sides of a courtyard. The rooms have two storeys divided by a floor supported by travertine corbels.

The upper floors had a perimetrical balcony that ran all around the inner courtyard. Small windows pierce the upper part of the walls and were barred already In early times with vertical metal bars. A rectangular hall divided in three sections and covered by cross vaults, occupies the whole south side of the building. Attached to the west side are the common latrines and a small room probably used by the warehouse guardian. The excessive width of the present carriage door that gives access to the complex is the consequence of a bad restoration.