The Greek and Latin libraries

They are situated on an artificial height (the upper Terrace), destined in ancient times to lodge a garden, and contained by a massive boundary wall with niches and a beautiful central stairway to connect the two levels.
They are two buildings faced the courtyard of the Libraries and connected by a porch, they are conventionally indicated like Greek and Latin Library.
The Greek one shows three plans, the last one of which was equipped with heating plant; it was connected with the maritime Theatre by an external stairway. 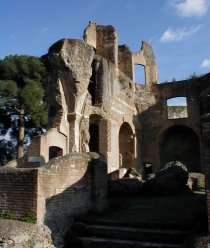 In the intermediate plan, that had not connection with the last floor, were guarded "praefurnia" (the entrance of the mouths of the furnaces), therefore there are service rooms.
Currently you can visit only the inferior floor, which is conected with the garden and has two main adjacent rooms, characterized by a series of rectangular niches along the walls, destined to receive the books. The Latin Library, whit its two plans, of which you can visit the inferior one, has a laying similar to the other. Also in this case we find a series of rooms disposed on the same axis: the front room is connected to the garden, embellished by a fountain, and introduces, it too, along the walls rectangular niches.

The posterior room instead shows an apse situated on the bottom, with a base for a group of statues also admirable from the outside. A lot of interpretations were given about the two buildings: somebody thought the niches, being oriented to north, were used like summery tricliniums, somebody like monumental entrance to the palace, somebody, at last, like turres apted to indicate the imperial residence.
The last floor was heated: this fact leaves to sense that it was used in winter like emperor's residence, also because it was directly connected to the domus on the maritime Theatre with the external stairway of which we spoke before.