Among the many monuments of the classic period, this small, round-based temple, an essential part of the charm of the Tiburtine acropolis, has always been considerated the most fascinating.

It dominates the narrow guly in wich cascade the waters of the falls and where today there is Villa Gregoriana. We don't know who it was dedicated to: many theories have been formulated.
According to these theories, the temple was erected to Hercules, the protecting god of Tibur (today Tivoli), or to Albunea, the tenth Sybil, or yet Vesta herself, or to Tiburnus, the hero the city was named after. The rectangular temple (temple of Sybil) has also been attributed to these same gods.

The round temple has the following features: a Corinthian perypterus 14,25 metres in diameter standing on a high podium of masonry clad in travertine blocks, 2,395 metres high. Inside the podium, there is a round cell with a door and two windows. All around this room, there is a 2,73 metre ambulacrum, decorated on the outside with 18 pillars; notice that today only ten pillars are standing. 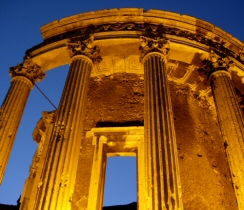 These columns on an Attic base have eighteen grooves each, the depth of the grooves diminishing gradually towards the top of capitals; above these again, there is a travertine stone entablature, splendidly decorated with garlands interspersed with bucranes.

The name of Lucius Gellius, magistrate and curator of public works in Tivoli in the first century, who was in charge of the work, is recorded on the architrave: "curant L.Gellio L.F.". During the Middle Ages, this temple was transformed into the churh of S.Maria Rotonda, no longer visible today because was restored to its original form at the end the 19th century.