At Km. 1 along the present road to Pomata (the old road to S.Gregorio) that runs parallel to the old road for the upkeep of the acqueducts, there is another splendid, several-storeyed house, not far from the one attributed to Marcus Brutus. Thanks to the massive sustaining walls of the different levels, it can be easily seen by anyone oassing along the road to S.Vittorino and the effect is of majestic power. Unfortunately, some years ago, one of the artificial levels (the middle terrace) collapsed after heavy rain. 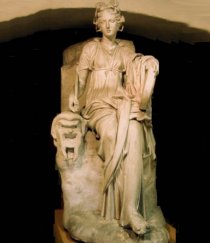 Thalia - the Muse of Commedy

The villa has therefore been deprived of one of the architect's happiest ideas, the contrast between the light of the vertical surfaces and the shade of the arches opening out under them. In previous centuries, many works of art have been taken away from the villa. During the excavations of 1773-1775 alone, thirty-three statues and groups of statues, a mosaic depicting a Nile scene (now in Russia) and six mirables columns were found.

In 1779, other excavations brought to light thirty-nine pieces, fortunately now in the Vatican Museums. A study of the building techinique (opus incertum), as well as other considerations, dates the three construction phases round about the end of the republic and the beginning of the empire.