Tomb of the Vestal Virgin Cossinia 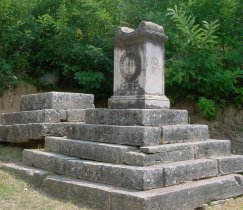 Tomb of the Vestal Virgin Cossinia

On the west side of the artificial lake created by the river Aniene, in an area used in olden days as a burial ground, we can see the tomb of the Vestal Virgin Cossinia. Nowadays, this monument is easily reached by means of a flight steps erected by the Tivoli Tourist Board.

The tomb is on two levels: one of three steps and another of five. On the five-step level there is a marble plaque covered in plants and without a border. On the front we can read the following inscription: V V Cossiniae L F (to the Vestal Virgin Cossinia, daughter of Lucius). On the other side of the plaque there are two lovely verses that can be translated like this: 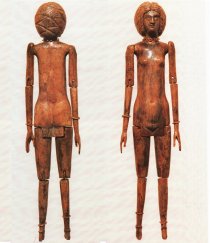 Here lies and rests teh Virgin / Borne by the people / Because she was faithful to the cult of Vesta for sixty-six years. A decree from the Senate donated her resting place.
The body of the virgin lay under the base composed of three steps. Beside her, a doll was found, souvenir of her childhood and symbol of her purity and chastity.
If she had been a Vestal for sixty-six years, it means that she had entered the House of Vesta at an extremely early age, dedicating her life to the guardianship of the sacred fire.

She could have retired after the age of thiry but preferred to remain there, thus gaining the admiration and respect of the Tiburtines, who wished to be near her at her funeral and burial.