About a mile from the town on a hill above the river we may still trace the ruins of Nero's Villa; the archaeological remains (that represent a small fragment of what once used to be a great buildings complex dedicated to recreation and idleness of this contradictory Roman Emperor) are located on the street that goes to the Monasteries. Many centuries ago this villa was one of the most beautiful and attractive places of the ancient Roman world.
In fact, Nero, the Roman emperor who built the splendid Domus Aurea in Rome, decided on this location to realize one of his large out-of-the-city villas, surely before 60 A.D..
The emperor Nero dammed the river in three places, creating three artificial lakes, the Simbruina stops flowing, connected by high waterfalls, obstructing the course of the Aniene river.
An inundation destroyed the lakes in 1305. 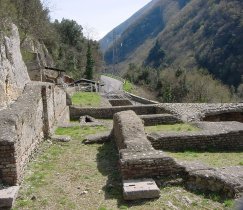 It was on these three lakes that he built the magnificent villa, and other complexes connected by walkways and bridges. From here the name "Sublaqueum", which means "under the lake", given first to the villa and then passed to the nearby town: from this was derived the name Subiaco.

The Roman architects created expressly the "via sublacense" perhaps using a part of the service street of the aqueducts that supplied water to the Capital, to led to the Villa.
In the Middle Ages, on the remains of Nero's Villa, one of the small cenoby was constructed, founded by San Benedetto (St. Benedict) to house the monks of his newborn Order.