13 km south-east of Tivoli and about 35 km from Rome, at a height of 651 m, stands the picturesque and medieval San Gregorio da Sassola, situated in the heart of Prenestini Mounts, in a strategic position on a spur of rock. Know initially as Castel San Gergorio, it owes its name to the Pontifex Gregory the Great (St. Gregory Magno) who owned the whole area and donated the feudal holding to the convent of Sant'Andrea al Celio in 587. In this area there was the ancient Aequian settlement of Aefula (mentioned by both Pliny and Livy) which was conquered by the Romans in 401 B.C. 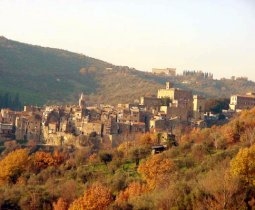 A view of San Gregorio

In the republican and imperial periods many Roman patrician families built their villas here, as various significant archaeological finds have shown.
Moreover in the countryside of San Gregorio da Sassola you can see many ruins of aqueducts, among the other the Mola Bridge.

The historical center, very well conserved, is divided into two distinct parts: one medieval, isolated on a rocky spur, and one XVI century (also called Borgo Pio because was being built by the cardinal Carlo Pio di Savoia after the plague of 1656) linked together by the castle, which is not isolated from the town it protects but wedges into the medieval part. The borgo consists of five identical groups of houses which alternate with each other along a straight road which ends in an oval piazza, and is one of the first examples of a rational building plan carried out in the Church State. 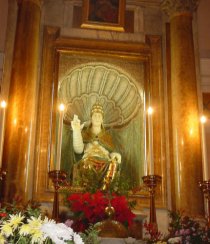 The village is characterized by narrow and dead-end lanes, is passed by a single main road and develops around the church dedicated to the patron saint: St.Gregory Magno. Other than the Brancaccio castle and the church of St. Gregory Magno, you can see a number of historical and artistic sites such as the church of the Madonna Cavata, the ruins of the Roman aqueducts, and the bridges of Sant'Antonio, San Pietro, and Ponte degli Arci. Just outside the town the S. Maria Nova convent and the S. Giovanni Evangelista church lie.