This baronial castle, characterised by powerful walls and constructed upon the antique ruins of a castle owned by the Colonna family, was built in the 10th century upon a tuffaceous spur that spreads out into the middle of a valley, which provides it with a perimeter wall. It was restored and enlarged in the following centuries.
Purchased by the Colonna family in 1321, it was later controlled by many different families, including the Orsini family, Cardinal Santacroce, the Poli family, the Barberini family and Cardinal Carlo Pio of Savoia who restored it in the 1655. After the death of the Cardinal the castle was abandoned for about two centuries until to 19th century (1840-1855) when it was restored again the dukes of Uceda and his wife Bernardina Fernandez de Velasco, without lose its powerful magnificence. 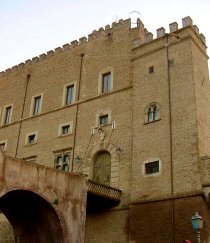 The building, that forms the original nucleus of the fortified borgo of San Gregorio da Sassola, is characterised by powerful walls crowned with merlons, a drawbridge, a line of crossed windows situated on the first floor and a quadrangular tower. The wll conserved draw bridge, under which passes the road that that leads to the inside of the inhabited centre of San Gregorio da Sassola, come in the scenic medieval complex to be explored by foot.

On the side overlooking the medieval part of town,

inside the castle's high walls, is a spacious courtyard, with another building set perpendicular to the rear façade of the main building.
The final owners of the castle were the princes of the Brancaccio family who ultimately left in 1899. 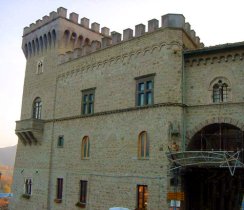 They added a tower, a large guest house and an arch joining the two buildings and leading down into the medieval town. As was the popular practice at that time, these additions and renovations

were designed in pseudo-medieval style. The ground-floor windows, for example, were replaced by Guelf-cross windows, and the chapel's old bell tower was turned into a turret.

Inside the rooms are decorated with a series of frescoes dating to the 16th century, attributed to Federico Zuccari (who then also worked on the Villa d'Este in Tivoli) and to the 18th century, attributed to the Neoclassical painter Andrea Appiani. In some rooms, the paintings shows the history of the Brancaccio family. Other rooms are decorated with grotesque motifs, and still others with landscapes. Some of the ceilings are frescoed with mythological scenes, including an Allegory of Sacred and Profane Love.
In 1989 the Brancaccio family left the castle to the municipality of San Gregorio da Sassola, as they had already done with Villa Brancaccio, which is now a public park.