In the heart of the tiburtine countryside, with a wonderfull and panoramic view on the historic center of Tivoli and on the roman countryside, just in front of the Sanctuary of Hercules Victor, are located the ruins of a roman villa, not far distant from the little church of the Madonna di Quintiliolo, an appellation which may possibly have been derived from the family name of Varus. 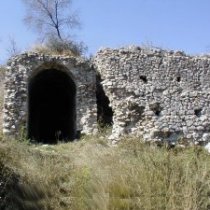 In fact the roman villa is attributed to Quintilio Varo, a roman military commander who held several important offices during the emperorship of Augustus.
He was also governor of Syria. Marcus Velleius Paterculus said that Varus entered the rich province of Syria as a poor man, but left the province a rich man and the province poor.

In Tivoli, Quintilio Varo built one of the greatest and wonderfull villas of the time, proved by the numerous statues mosaics and other works of art which have been found among its ruins many of which, nowadays, are in the Vatican museum. The extent of his living quarters was about 200 by 300 yards (or meters) ? a little over 12 acres. 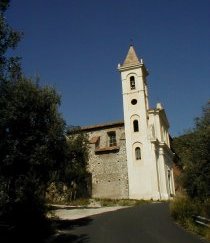 The villa was situated on the ridge so that those looking southeastwards towards Tibur could observe the verdant canyon of the Anio and the several waterfalls plummeting to the valley below. The foundational remains and the remnants of three walls surrounding the interior of the residential villa are still to be seen.

To reach the villa you must go by car: from Villa Gregoriana take the street "Via di Quintilio Varo" that borders the waterfalls and, crossing olive groves, arrive to the little church of Madonna di Quintiliolo and the Quintilio Varo's villa.
Very interesting is also the little church that, according to the tradition, is located in the same place where a painting of the Virgin Mary was found. The painting is now stored in the church.