History of the sanctuary of Mentorella

The Sanctuary of the Mentorella is the first one in Italy dedicated to the Virgin Mary.
The Sanctuary of the Mentorella was founded thanks to Constantine, the first Christian emperor, 1800 years ago. According to Christian tradition, Saint Eustachio (formerly Roman general Placidus) had a miraculous vision of Christ between the antlers of the stag he was hunting on this site at the time of the Emperor Hadrian (117-138 AD). Two centuries later the Emperor Constantine decided to build a magnificent basilica on the spot of Eustachius conversion. It was dedicated to the honor of the Most Blessed Mother of God, and consecrated by Pope Silvester I sometime before 335. 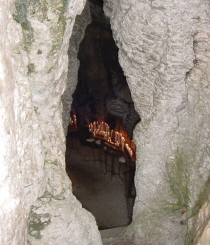 The shrine was run by the Benedictines of Subiaco from IX to XIV centuries: they made several important work and ornamentation as long as, at the end of the 14th century, they abandoned it. The sanctuary fell into disrepair and ruins until to 17th century when Jesuit scholar Father Anthanasius Kircher, believing that Mentorella was one of the 12 abbeys founded by St. Benedict and that he lived in the adjacent cave for up to two years, discovered it.

St. Benedict lived here, in seclusion and prayer, for two years in the natural cave, which can still be visited just a few steps from the sanctuary's church. The sanctuary was rebuild thanks to the effort of father Kircher. He dedicated much of his remaining energy also to restor the cult of our Lady of Mentorella, reestablishing the shrine as a site of pilgrimage. When, on Nov 27, 1680, Kircher died he asked that his heart be buried in the church. 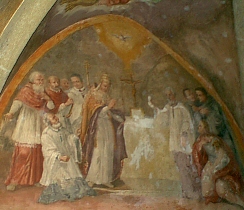 Fresco in the church

When Karol Wojtyla was still a priest, the Mentorella Sanctuary was for him a place of meditation and prayer. Immediately after his election as Pope as John Paul II, was visiting the shrine of Mentorella. Also Pope Benedict XVI chose this Sanctuary for his first excursion.