Sanctuary of Mentorella and his treasures

The Sanctuary of the Mentorella was run by the Benedictines of Subiaco from IX to XIV centuries and in this period it reached the greatest splendour: during this time most of the important work and ornamentation took place. The church founded in the 4th century and restructured in the XII-XIII century with a simple hut facade in medieval style, is decorated throughout with several interesting frescoes and paintings of XV century. Inside the church there are a number of precious wooden pieces as the wooden statue depicting the Madonna of the Graces with Baby Jesus and embedded with gems and pearls. It is preserved in the main altar of the church. 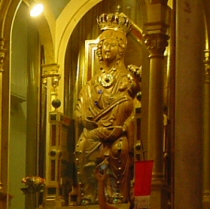 Wooden statue of Mary with Child

This is a high-relief from the 12th century of the Lazio school and one of the best known examples of regional wooden sculpture.
In the chapel of the crucifixion, there is a wooden reredos of an ancient and antique mould , representing Pope Sylvester (the name of the Pope is engraven upon it) surrounded by a number of ecclesiastics in the act of consecrating the shrine.

To see also a beautiful Crucifix and processional Cross both of 14 century. You can also visit the nearby cave, just a few steps from the sanctuary's church, where legend holds that St. Benedict of Norcia lived for two years.