Above the southeast side of the Piazza Marconi stands, in a magnificent park, is located the famous Villa Aldobrandini (also called as Villa Belvedere), one of the most magnificent Villas of the Castelli Romani area. It was built at the beginning of the XVIIth century (1550) by Monsignor Alessandro Rufini above the remains of a Roman villa belonging to the Ottavi family. After changing owners on various occasions, finally in 1598 it came into the hands of cardinal Pietro Aldobrandini, nephew of Pope Clement VIII.
In 1601 the cardinal employed Giacomo della Porta, a pupil of Michaelangelo who designed the Villa in the current form, with an imposing 18th century façade adorned with pilasters and the Aldobrandini coat of arms above the door. The work was then completed by architects Carlo Maderno and Giovanni Fontana. 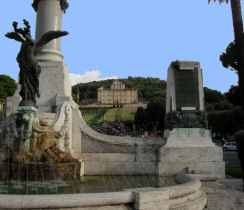 The Villa, located on a series of regular shaped terraces, on one of which, the palace itself stands, is not one of the largest at Frascati: its width is imposing but there is very little depth. Inside the Villa is decorated with paintings of like the Zuccari brothers, Cavalier D'Arpino and Domenichino. In the first floor are located the aristocratic rooms decorated with biblical themes by Giuseppe Cesari, know as the Cavalier D'Arpino.

A spiral staircase, or by using another stairway located directly on the back of the palace façade, gives access to the above floors: in the second floor there is the great hall and in the third floor there is the loggia assigned to the noblemen and their guests (J.W. Goethe was a guest for a period of time, during his Italian travels).
The Villa is surrounded by a magnificent gorgeous park with secular plane trees, holm oaks and pine trees, extensive views, grottoes, fountains, cascade. Particularly famous are the Water stairway and the Teatro delle Acque ("Waters' Theater"), by Carlo Maderno and Orazio Olivieri (who worked also in Villa d'Este) , a complex of fountains, niches, statues with the chapel dedicated to St. Sebastian, the patron of the Aldobrandini family. 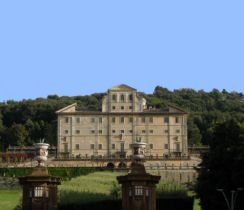 In later times the villa was acquired by the Pamphili family and then by the Borghese family. In 1832 in fact Francesco Borghese Aldobrandini bought back the villa and garden from General Miollis' heirs.
In 1873 the northern flank of the garden of the Villa was cut away and a high retaining wall was built along the new Via Nazionale (who linked the Termini Railway Station to the city centre) to support the remains of the hill on which the garden is located.

The villa is visible only from the outside and occasionally it is visible inside. Outside the monumental gate by C.F. Bizzaccheri (18th century) there are the