In 1809 Frascati was annexed to the French Empire, and selected as capital of the Roman canton.
In autumn 1837, there was a plague epidemic in Rome, and 5,000 people left Rome. Frascati was the only city that opened its doors to them. Since then Frascati's flag has been the same as Rome's, yellow and red. 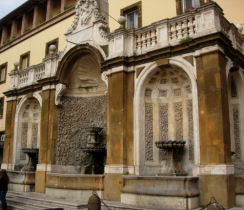 Fountain of XVIII century of G.Fontana

In 1856 the city was chosen as the terminus of the first railway (Rome and Frascati Rail Road) to be built by the Papal State (project completed by Pius IX but planned by his predecessor Gregory XVI who loved these sites). The last section of the railway line was inaugurated in 1884, 14 years after the city became part of the new Kingdom of Italy. After the Unification of Italy the city walls were destroyed and it was erected a massive wall that supports the walkway dedicated to Queen Margherita.

On December 17, 1901 the first electricity reached Frascati from a hydroelectric plant in Tivoli.
On 8 September 1943, during World War II, Frascati was heavily bombed. About 50% of buildings, many of the monuments, villas and houses were destroyed, and many people died.