The most important archeological finding in the area of Frascati, dating back to Roman Age, specifically to Republican Age, is a patrician Roman villa attributed to Lucullus. In the first century AD the owner was Gaius Sallustius Crispus Passienus, who married Agrippina the Younger, mother of Nero. Later, in the Imperial Age, his properties were confiscated by passed to the family of Flavian emperors (69 - 96 AD). In the this area stands today the church of Saint Maria in Vivario built up in the area correnspondent to the Vivarium (water tank). After the destruction of Tusculum in 1191, the town population increased and the bishopric moved out from Tusculum to Frascati. 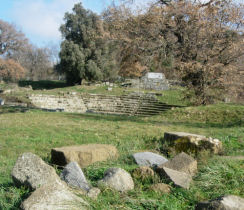 Ruins of the ancient Tusculum

At the end of XIII century the importance of Frascati increased as testified by the restoration of Saint Maria in Vivario and the construction of the bell tower (in 1305 as written in the epigraph) still today the most important testimony of medieval Frascati. In 1354 passed in Frascati also Cola di Rienzo, that "here had plenty of bowmen and foot soldiers".

Pope Innocent III endorsed the city as a feudal possession of the basilica of San Giovanni in Laterano, but in the following centuries its territories was ravaged by frequent raids that impoverished it. During the exile of Popes in Avignon till the end of the 400's, Frascati was under control of the Colonna family until, in 1460, the great humanist Pope Pius II of the Piccolomini family fortified the place with walls and built the castle, today bishop's residence.
In 1515 Marcantonio Colonna gave to Frascati the "Statuti e Capituli del Castello di Frascati", the first city statute with rules and regulations to observe. 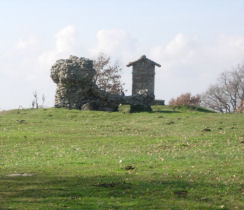 Ruins of the ancient Tusculum

In 1518 a Hospital was built, named after St. Sebastiano, in memory of the old basilica destroyed in the 9th century. After Prince Colonna's death in 1522 Lucrezia della Rovere sold Frascati to Pier Luigi Farnese, nephew of Pope Paul III Farnese that, in1538, gave to the town the name of Tusculum Novum.

Paul III entrusted Antonio da Sangallo the Young with the task of definining the urbanistic features of the town so divided into three different districts: St. Maria, St. Flavia and St. Peter. In 1559 (year of the peace of Cateau-Cambrésis) began a glorious period for the town: the noble Roman families (Aldobrandini, Lancellotti, Falconieri, Mondragone, Parisi, Dumb, Grazioli, Torlonia) elected Frascati for the construction of their country residences, places of delight, in which they lived set apart from common people and town daily activities. separation confirmed by the architecture of these villas that offer to the city an austere flat façade and reserving to the inner façade the sight of majestic and fancy decorations. In 1558 the new cathedral dedicated to St. Peter was built in the area that was designated as new center of the town, marking the development that the area had had as a result of the setting of the villas towards the hills and the peripheral position of the ancient Saint Maria in Vivario.
Since then the city urban setting did not change so much.