The other churches of Frascati

The Church of the Gesù

The Church of the Gesù (16th/17th centuries) has two main characteristics: the simple but elegant travertine facade and the fully decorated inside halls with a barrel vault, side chapels and altars. On the façade there are niches with statues attributed to Pietro da Cortona. The interior has an illusionistic false dome and architectural works by Andrea Pozzo. The Church offers the extraordinary prospective of a false vault. In fact inside, it offers the most homogeneous example of architectural features and paintings, kept in very good condition in the entire area of the Roman Castles. 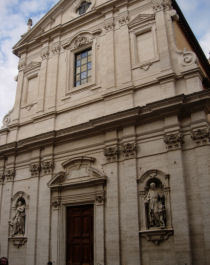 The Church of the Gesù

Church of Santa Maria in Vivario

The church is the oldest church in Frascati, found in the ruins of a vivarium (water tank) of a patrician Roman Villa attributed to Lucullus.
This small church, with its beautiful bell tower of San Rocco built in 1035, is characterized by three orders of three-mullioned windows.

The actual look is due to a renewal in order to give back his ancient architectural look that the Cardinal of Estouteville gave in 1400. Ancient paintings have being recovered from the ruins like those in the side chapel and in the arch. Just behind it you can see the castle with a squared tower completely renewed by the Duke of York. 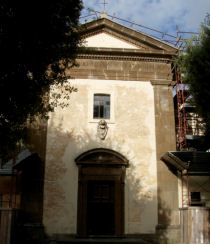 The Church in the Monastery of the Cappuccini was built on a terrace in the country side where the view is up to Monte Soratte which is quite far. The church was dedicated to San Francesco Of Assisi and was built in 1575.

Its structure was made of only a single aisle and in the side chapels are several paintings. On its left there is the Ethiopic museum and on its right the Monastery.